On September 30, Salt Lake County District Attorney Sim Gill announced that the prosecutor’s office had reviewed body camera footage and cleared a police officer of potential charges for shooting an unarmed man. The body-cam video (available from the Salt Lake Tribune) shows the man walking away from the officer before turning around and lifting up his shirt. Sim Gill said the video showed the officer was justified in his fear for his safety and the use of a firearm was reasonable.

Over the last couple months, there been heightened public scrutiny of police shootings and other actions. A properly used body-cam would record whenever a police officer is on duty. Unfortunately, no police department in Utah requires all officers to use them. This video helped clear one officer. With regular use, officers should become accustomed to having everything on tape and just behave in their usual manner.

Digital recording technology has advanced to the point that police departments throughout Utah could have every officer regularly wear a body cam. They would be invaluable in bolstering police officer testimony, and they would not be susceptible to the problems of memory. It is curious that police departments are the least bit reluctant to start requiring every officer to wear one.

If there were a piece of scientific evidence that had a 30% failure rate, we would not let it into court. Polygraphs, which have been shown to be accurate between 90 and 95% of the time, are inadmissible. The justice system has decided that juries will give too much weight to the information. Yet eyewitness testimony, in study after study, has shown to have high error rates, but is not only let into court, it is frequently the determining factor in a jury’s decision.

The rules of evidence are quite complicated. The central rule is that the evidence has to be relevant. After that, most rules are designed to keep juries from letting the wrong factors determine their decision. In other words, the evidence is relevant, but due to human nature, a jury either will not hear it at all or a judge must carefully limit the evidence in order to prevent that particular piece of evidence from being the only thing a jury considers.

Studies have shown there is no correlation between how confident a witness is and how accurate their memory actually is. But a confident witnesses is a more believable witness, so prosecutors encourage witnesses to state a high degree of certainty to a jury.

Most people overestimate their own ability to remember things, and likewise overestimate other people’s memories. False memories tend to accord to our philosophy and world view. As a recent slate article put it, “The scary part is that your memories have already been altered. Much of what you recall about your life never happened, or it happened in a very different way. Sometimes our false memories have done terrible things. They have sent innocent people to jail.”

Another problem with eyewitness testimony was highlighted with a recent study that showed police officers are more forgetful after a chase or an altercation. A CNN story about the study says that the officers had a briefing on three armed robberies and then shown six photographs of suspects. Then:

The group was split into pairs where one officer rigorously assaulted a punching bag until he was visibly tired, the other did not. They were then taken to a trailer set up to represent a realistic “home” environment complete with a “target” individual who had access to multiple weapons strategically placed around the room.

Each officer went through a scenario where there was a brief but angry verbal confrontation with that person. Shortly after the scenario was over, officers were given three memory tests. They were asked to recall details of their initial briefing, the encounter – and then shown the lineup photographs.

Researchers found the group that physically exerted themselves remembered less information from the original briefing and the encounter with the target individual. In fact, more than 90% of the officers in the non-exertion group could recall at least one detail about the target. Barely a third of the officers who were involved in the physical activity remembered seeing the target person at all.

Although the study was conducted on just police officers, there is no reason to believe that the results would have been any different if they had been conducted on the general public. The participants in the study were screened to ensure that they were physically fit, and, as police officers, they are regularly asked to remember crucial details, often after physical exertion. Only a third of trained officers were able to remember any details at all about the person they encountered, so laypeople are going to have a more difficult time. Winded witnesses simply cannot be trusted to adequately identify suspects. And yet juries continue to give undue credibility on eyewitness identification. 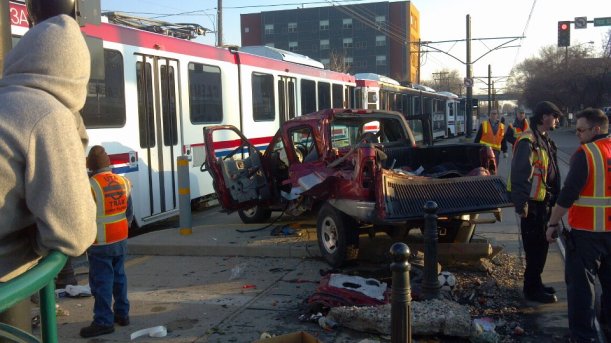 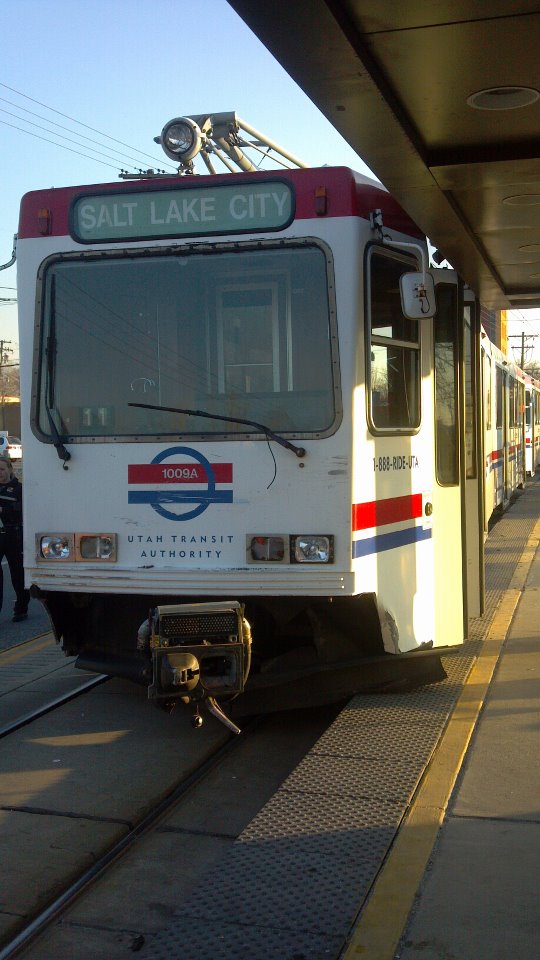 The front of the TRAX train has lifted onto the curb

I took the above pictures last night at my regular TRAX train stop. At the station, I talked to a number of people who were on the train when the truck and the train collided. These eyewitnesses all said pretty much the same thing: the guy in the red truck ran a red light and got hit by the train; the truck spun around and smashed into the concrete; and the train driver slammed on the breaks.

That sounded like a convincing eyewitness description of what happened until I dug a bit deeper. Everyone I talked to, when I asked if they saw the accident as it happened or if they only felt it, said that they only felt the accident. One guy said he was reading when it happened and just felt the train slam on its brakes. And from personal experience, I can’t see the traffic lights when I’m sitting on the train. How did everyone come to the conclusion that the truck ran a red light?

There’s two possible explanations for this consensus of what happened, despite few having actually watched it. 1) Everyone was passing along information they got from one of the few people who actually witnessed it. 2) Everyone was doing a lot of “gap filling” in their knowledge of what happened. They took what they knew to be facts and made assumptions about what happened. These two explanation are not mutually exclusive and actually reinforce one another. The gaps in our knowledge are most easily filled through information from other people. But it’s entirely possible that no passengers saw the truck run the red light and everyone is relying on gap filling, and groupthink was convincing each person of the correctness of this narrative.

Most of the time, there’s nothing wrong with gap filling or using second-hand information; such mental processes help us function. Unfortunately, people are very poor about remembering where they actually acquired a piece of information. Once our brains come to accept something as fact, we completely forget that we didn’t actually see the train colliding with the car. Instead, we remember the event around the narratives we have each formed in our heads. Also, memory is affected by retelling, but we rarely tell a story in a neutral fashion. People add emotion and subtle details to the narrative to help it arrive at a conclusion.

This can be a big problem for lawyers who need to question witnesses weeks or even years after an event. Witnesses will tell the juries that they saw the truck run the red light, when they really didn’t, and they are not necessarily being untruthful when they do that. They really think they saw the accident the way they recount.

There isn’t an easy solution to the memory problem. The more we learn about memory, the more we learn how fallible it is. Eyewitness testimony has an appropriate place in our court system, but that testimony should be buttressed with scientific evidence.