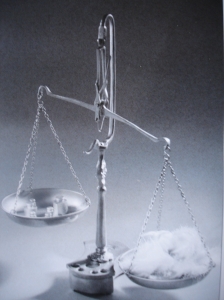 Justice is unbalanced.
Photo by “Frachet“

The modern day practice of prosecutors is to charge a defendant with every charge that could apply, and then drop several charges during the plea bargaining phase. It was not always so. Until about 1970, plea bargaining was a rare occurrence in the United States. When people were charged with crimes, prosecutors were expected to prove them before a jury. There were exceptions, of course, but sooner or later they had to go before a jury and make a case. This kept them in check. The more crimes charged, the more preparation to be done for a trial. Including weaker charges would allow defense lawyers to focus on those charges and suggest they were overzealous. Prosecutors probably care a little too deeply about their win/loss record for each charge in their jury trials. (They look at it like baseball stats, in a way.)

In 1970, the Supreme Court gave its explicit blessing to plea bargaining. Article III of the Constitution provides, “The trial of all crimes, except in cases of impeachment, shall be by jury.” Many legal experts were of the opinion that plea bargaining was unconstitutional. In Brady v. United States the Court said that plea bargaining is acceptable as long as the pleas are “knowing, intelligent acts done with sufficient awareness of the relevant circumstances and likely consequences.” The number of cases resolved through plea bargaining jumped and kept on growing so that few cases make it to trial now. Today, prosecutors regularly agree to drop one or more charges in exchange for a plea, and judges have no problem with this.

This period of plea bargaining has also coincided with a systematic increase in prison or jail sentences. Legislators have decided that they want to be “tough on crime” so that sentences are about three times as long as they were fifty years ago. Combine this with an explosion in the number of crimes that are on the books and a person can be facing a very long sentence, indeed. As a result, many defendants feel coerced into taking a plea. Some prosecutors threaten to bring further charges or prosecute friends and family, if a defendant does not take a plea offer.